Riga (now the EU’s “Capital of European Culture”) Really did Allow Yet Another City-Centre Waffen SS Celebration on March 16th! 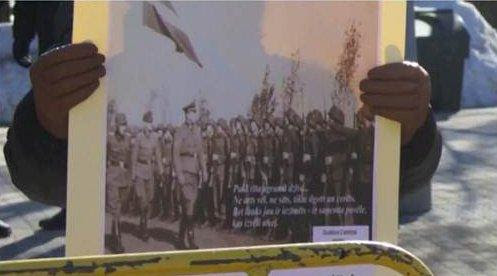 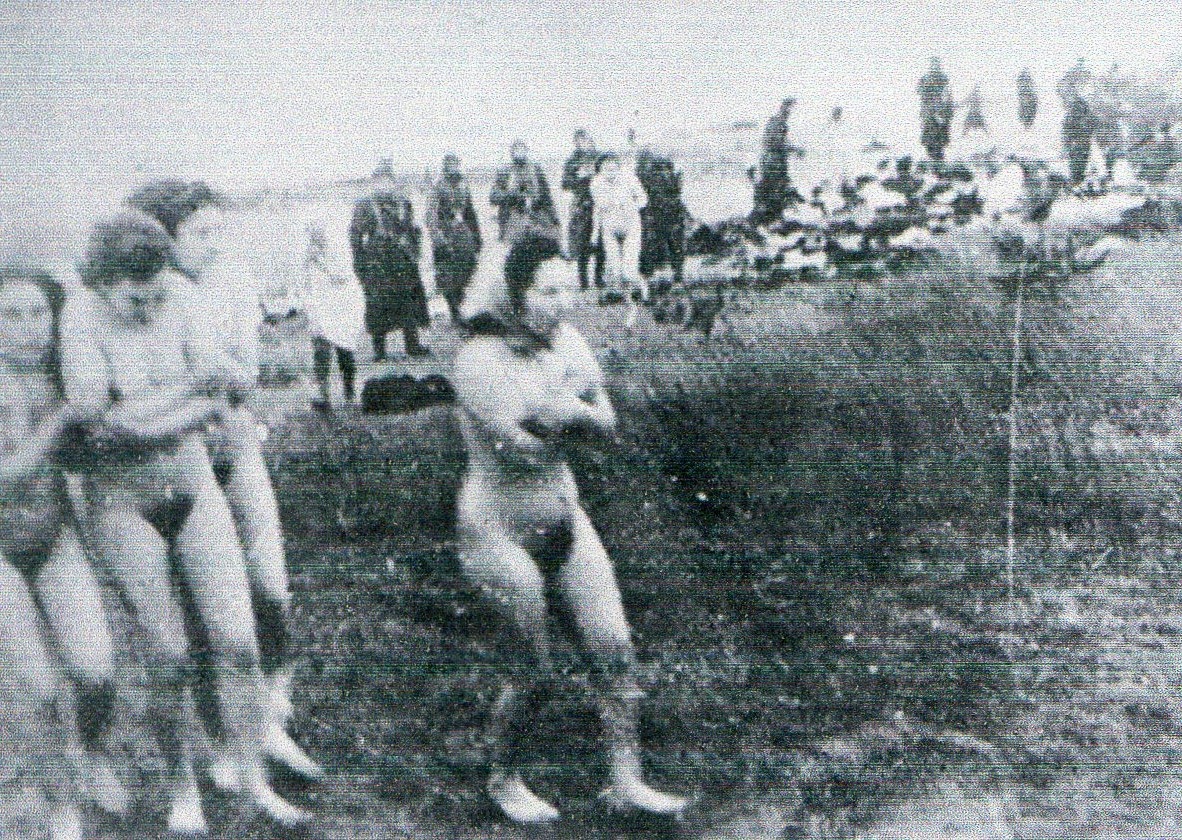 “If any government wants to endorse these kind of actions then there is cause for concern” — Glyn Ford, UK MEP

Wreath to the victims of Nazism destroyed March 16, 2012

Simply a traditional symbol or swastika whilst drumming to the tune of the SS ? March 16, 2014

Excellent photo reportage of the protesters and the marchers

'Dr Efraim Zuroff  speaking about the SS at 50.22-52.50  'Politicians who attend these events should be re-educated or fired'.
The beginning of the clip also shows the German anti fascists and the problems they encountered

ENCOURAGING DEVELOPMENTS ( in relation to previous years): Latvian Government advised people to stay away, forbade ministers from attending and sacked the one who did. Latvian MP Nikolajs Kabanovs and journalist Juris Kaža visited Latvia Without Nazism protest conference in gestures of dialogue and reconciliation. British MEP Richard Howitt’s statement was read out at the conference.

http://oberndorfgedenken.de/riga%20waffen%20ss.pdf  with many links to articles, photo reportages and you tube clips


This is a report  by a right wing TV station in Riga, it focuses on the German  anti fascist group who were repeatedly hindered by Latvian authorities from protesting, delayed for hours at Schengen border and on the 16 March 2014 removed to a site away from the monument of freedom where in the main they were unseen and unheard   see  from 4.36  https://www.youtube.com/watch?v=HpIgfGYtCxI


Here a report from German fascists who felt very welcomed at the march and  according to their report made many new 'friends' in Riga:
http://altermedia-deutschland.info/content.php/6495-Dortmunder-Delegation-beim-Veteranenmarsch-in-Riga?s=0d6ad904a243783a3703f6b73c74d855

A month before the march

February 5 2014 Latvian minister on regional policy Mr. Cilinskis announces he will be attending the march
...
Despite problems in Ukraine 7 March 2014 the march is to go ahead


Hope Not Hate 9 March 2014 'Riga permits march to honor SS veterans'
And  Then Just Before the March and on the Day
Latvian minister to be fired for planning to attend the march
http://www.haaretz.com/jewish-world/jewish-world-news/1.580163


Global Post” (UK) –  From 2012 but as pertinent as ever  Eastern Europe’s Hitler Nostalgia by Michael Goldfarb
www.globalpost.com/series/echoes-hitler


MEP Richard Howitt's statement opposing the SS march today in Riga  read out 17.03.2014 by Jeff Lewis on
Salford City Radio, 94.4FM, 7-8pm and will, for a week following the show, be on the Jewish Hour page on the Salford City Radio website, click on "Listen again":
http://www.salfordcityradio.org/shows.php?id=1397
For other ways to listen live, see  website: www.jewishhour.co.uk

Today brings the seventeenth annual march in Riga, Latvia glorifying Waffen SS forces from the Nazi era which brought death and destruction to our continent and which today’s European Union was supposed to consign to history.
I am pleased to hear that the Latvian Government has forbidden Ministers from attending the march this year, but condemn the Latvian High Court’s decision of 2013, forcing the Riga Mayor to apologise for all the years of trying to ban it.
Coming from Britain, I am saddened that the governing Conservative Party from my country chooses to ally itself in a common European Group with the Latvian “For Fatherland and Freedom Party,” whose Member of the European Parliament is on record as supporting this sickening celebration, even supporting its previous status as a public holiday in the country.
I am also shocked at the report that the British Conservative MEP who was head of his European group in 2012, is reported to have personally refused to sign the petition against the celebration , despite 7,000 people worldwide having done so.
The party of Government of my country should not sit with a party which has proposed the Waffen SS troops be renamed “liberation fighters.”
They are a scar on my own country.
What they should remember is that almost all of Latvia’s 70,000 Jews were murdered during the Holocaust.
Whether local boys were forced to don the SS uniforms or were eager volunteers, celebration of their actions not only insults the memory of the victims but also honours Nazism itself.
Today, the British Labour Party stands with all victims of the Second World War, all who condemn fascism, all who oppose antisemitism and other forms of racism, to express our horror at those who seek to rewrite history in order to justify those who would spread bitterness, hate and division in a new century.
This year sees the 100 years centenary since the beginning of the First World War, and people throughout Europe will come together to remember the horrors of both wars of the twentieth century and celebrate the fact fascism was defeated and not victorious.
When survivors of Nazi concentration camps in 1945 stood holding signs saying “never again,” they could not have foreseen what is happening today in Riga. These are the people we should be commemorating and this is the message we should remember.
RICHARD HOWITT MEP
Report on Latvia by the ECRI calling a halt to all forms of Nazi glorification February 21,2012

In the framework of its statutory activities, ECRI conducts country-by-country monitoring work, which analyses the situation in each of the member States regarding racism and intolerance and draws up suggestions and proposals for dealing with the problems identified. In the report on Latvia published on February 21, 2012 ECRI expresses concern as regards the authorisation of certain public events to commemorate two incidents and the authorities’ reaction in this connection. As concerns the first incident, every year, on 16 March, a gathering commemorating soldiers who fought in a Latvian unit of the Waffen SS is held in the centre of Riga. In this connection, ECRI regrets that, in spring 2010, an administrative district court overruled a decision of the Riga City Council 27 prohibiting this march. Moreover, ECRI is concerned that the speaker of the Latvian Parliament allegedly publicly expressed regret for the formal prohibition of this event and that certain MPs have voted for the restoration of March 16 as day of remembrance.
Dialogues with Latvian ambassadors in London and Berlin since 2012
2012:

2014
Meeting with Latvian Ambassador  Teikman in London
Alex Brummer (Vice president of the Board of Deputies of British Jews), alongside Public Affairs International Officer Joseph Moses and Deputy Alex Faiman met with the Latvian Ambassador. The meeting was held in a positive atmosphere. Discussions began surrounding the Jewish Community’s EU Manifesto, with the Ambassador intrigued by the document. They also raised concerns surrounding the annual 16th March SS march through . Ambassador Teikman is assured us that there would be no government officials taking part and that the government condemned Nazi ideology. There was general agreement on the importance of Holocaust education.


The Board of Deputies of British Jews , Jewish Manifesto for the 2014 European Elections
For a copy of the Manifesto please click here.

In Europe, the 2008 Prague Declaration caused alarm among many Jewish communities by conflating crimes under Soviet Communism with Nazi crimes. The concern here is that some countries have
attempted to deflect attention from the complicity of their wartime governments in the Holocaust, using this as a cynical attempt to avoid liability for compensation to Jewish victims. The crimes that
Communist governments committed against their people should be explored and the perpetrators prosecuted, but it is important that countries acknowledge their role in the Holocaust and do not
attempt to dismiss a very troubled period in their history by reference to what happened under Communism.
At times, a related trope is that many leading Communists were Jews and so the Jews as a whole are complicit in the crimes of Communism. The rationale continues that, as such, Jews in general do not
deserve sympathy or compensation for what they suffered during the Holocaust. But the fact that some Jews were leading Communists did not leave Jews – as a corporate entity – with the wealth of the subjugated people in the same way that Nazi expropriation of Jewish property remains in the hands of some states.
Commitment: MEPs should challenge their European colleagues on these narratives that seek to minimise or downplay the Holocaust.

and section 3.2 on restitution
In Croatia and Latvia, the relevant legislation has been delayed. In Romania, the processing of claims and payments has been extremely slow. Recent legislation risks further delays and reductions in
compensation payments. In Hungary, discussions continue about restitution for heirless and hitherto unclaimed property formerly owned by Jews. Poland has one of the worst records on restitution of
private property. It back-tracked on some of the commitments it made at the 2009 Terezin Conference, and was the only one of the 47 countries not to send a delegate to the 2012 Prague Conference.
The great injustice about the delays in restitution payments mean that some of the Holocaust’s victims will pass away without ever seeing their property returned.
Commitment: MEPs should use the moral authority of their position to call for a just and speedy conclusion to the issue of restitution across Europe and to press the institutions of the European Union to do the same

On the 25 May, 2013, I sent you my documentary, “Wir haben es doch erlebt — Das Ghetto von Riga“.  On the 10 July, 2013, I went in person to the embassy, to personally give you the documentary; as you stated that it had not arrived on two occasions. As you were not available, an exchange took place on the sidewalk, in front of the embassy building.
I had hoped to give you, as embassy representative, a film that is the first of its kind to tell, worldwide, the story of the Riga Ghetto. In addition, I had suggested that the film be shown as part of the program that celebrates, in 2014, with Riga as Capital of European Culture.
Despite repeated telephone inquiries and letters I have to date not heard from you.
I am not aware, if, as part of your diplomatic duties for your country, you have publicised the film or if you have forwarded it on to Riga. I do not know where you have placed the film or of any attempts made to screen the film this year.
I would like to mention how truly astonished I am at the manner in which you have handled this matter. I would be grateful if you would now officially state whether there are any plans to screen the film in 2014 in Riga.
Furthermore, I would like to know what the official opinion is regarding the planned SS legionnaires, so-called “veterans “march, scheduled for  16 of March 2014.
Is it, incidentally, your opinion that such an event is compatible with Riga being European Capital of Culture?
Yours sincerely,
Jürgen Hobrecht

After Ukraine... why do those Baltic states glorify Nazism?


You can listen to  Salford City Radio live, 94.4FM, 7-8pm and the SCR website, and for a week following the show by going to the Jewish Hour page on the Salford City Radio website and clicking on "Listen again":
http://www.salfordcityradio.org/shows.php?id=1397

Crooning about Cukurs (published on You Tube 16 July 2014) and  soon to be shown in the European designated Cultural Capital Riga!

Banalisation of butchery reaches a new low note in Latvia. Former member of the notorious Arajs commando Herbert Cukurs is glorified in latest show stopper . One can only assume that 'Romance in Rumbula', 'Singalong Viktor' and 'Reaching Fever Pitch' will become hot favourites soon. https://www.youtube.com/watch?v=PsdwCXVJwUc


For the facts around Cukurs and his heinous crimes see:

http://www.operationlastchance.org/Writings_12.htm    The mass murderer as Hero  by Dr Efraim Zuroff

http://www.jpost.com/Opinion/Op-Ed-Contributors/The-death-of-a-Nazi-hunter    It is shame that Cukurs' many heinous crimes were never presented to a court of law, but at least he was  not able to escape punishment