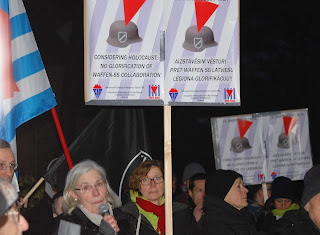 Cornelia Kerth, chair of the VVN-BdA protesting outside the Latvian embassy in Berlin on 15 March 2016 after having been prevented from boarding a flight to Riga from Berlin with Baltic Air earlier that same day.  The VVN-BdA demanded that her five fellow protesters, who had been allowed to leave the country, only to be arrested on arrival at Riga airport and placed into a Latvian jail, be immediately released. 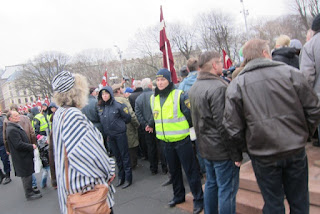 Ten Steps Back, One Step Forward- The Pantomime Has Started!

'Sad day. In Riga where several hundred people turned out to honor the soldiers of the two Latvian SS divisions, who fought for a victory of Nazi Germany in WW I...I. Portrayed as freedom fighters who paved the way for Latvian independence (which the Nazis had no intention of giving them), they included participants in the mass murder of Latvian Jewry and many thousands of Jews deported to Latvia to be murdered'
Dr Efraim Zuroff, Simon Wiesenthal Centre
Listen  to Dr Efraim Zuroff  speaking on Monday  21 March on Salford City Radio 94.4FM

Interview in German with

Markus Tervooren the executive secretary of Berliner VVN-BdA, one of the five German protesters arrested at Riga airport

http://rus.delfi.lv/news/daily/latvia/zaderzhannogo-za-provokacii-blogera-zhurnalista-fillipsa-otpustili.d?id=47191569  -Another shocking video, Graham Phillips asking Estonian politician Jaak Madison if he is not ashamed to be attending a fascist march


Interior Minister Rihards Kozlovskis on March 16 stating that only one person was arrested when in fact five law abiding German citizens were arrested at Riga airport for simply wishing to peacefully protest at the march.  Note that the minister did not mention that Azov Neo Nazis attended the march or Holocaust revisionists such as Estonian politician Jaak Madison.


A variety of voices with:
Liana Langa on setting the record straight
Juris Ulmanis on the Legion and the National Guard
Boriss Cilevics on politics and March 16
Mr and Mrs Harries
Efraim Zuroff on anti-Semitism

Interior Minister Rihards Kozlovskis on March 16
http://www.lsm.lv/en/article/societ/society/march-16-risk-same-as-ever-says-security-chief.a173541/
March 16 risk same as ever says security chief .
Security Police head Normunds Mezvietis Forgot to Mention that Innocent Protesters Would Be Arrested at Riga Airport whilst Azov Neo Nazis would be accompanied by politicians
"One of the purposes of the anti-fascists is to provoke the event participants," he said.
"By separating the different groups the risk of physical violence has been minimised," he added.
He also said that EU citizens were harder to prevent from entering the country, but that they could still be prevented.
"Increased border controls are a traditional measure taken, and one that we will be using this year as well," Mezviets said.